I saw this article and thought it was great! 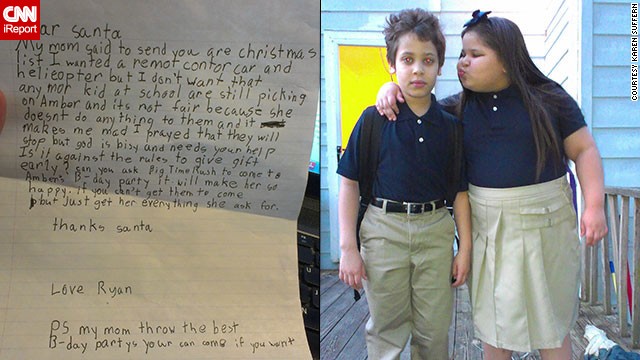 Ryan wrote to Santa, asking for help to stop the bullying his sister, Amber, is facing at school.

(CNN) -- For many families, the school year just started, but for Karen Suffern, it's not too early to start planning for Christmas.

The financially struggling single mother of fraternal twins recently asked her 8-year-olds to write down a list of things they would like from Santa. Suffern, who works part time as an administrative assistant for a home health care company, wanted to start budgeting for the holidays. She knew her twins, who just began third grade, were at the age where they would start asking for electronics and other expensive gifts.

Her son, Ryan's, letter to Santa started off normally:

"Dear Santa ... I wanted a (remote control) car and helicopter, but I don't want that anymor. Kid at school are still picking on Amber and its not fair," he wrote. "I prayed that they will stop but god is bisy and needs your help."

Girl jumps off building after bullying

Family: Teen was bullied before suicide

Suffern felt tears fill her eyes as she read her son's letter asking Santa to help stop the bullying his overweight sister was experiencing at school.

Reading the letter was tough for Suffern. "I try to build up my daughter's self-esteem and tell her she is beautiful, but people say hurtful things to me, because I also have a weight problem, and that hurts me," she said. "I can't imagine what she goes through."

She had a vague idea that Amber was teased on the bus, but she didn't know the extent of the bullying. Amber, who has attention-deficit (hyperactivity) disorder and other mental and mood disorders, never mentioned the teasing.

Suffern explains that Amber is an emotional eater and weighs 140 pounds, nearly twice the size of her brother, Ryan.

The twins returned to school three weeks ago at Rocky Mount Preparatory in North Carolina. It's the first time Ryan and Amber have been in the same classes.

Ryan would come up to Suffern to tell her in private about classmates bullying Amber -- how the kids in gym class would laugh at her when she could not do the bear crawl on the floor, tease her about her weight in class or tell her that she was adopted because she is multiracial.

"Every day when she goes to school, she says, 'Mommy, can I just stay at home?' and she just doesn't want to go.' And now every time I send her to school, I feel like I am not protecting her and I am letting her down," Suffern said.

After reading her son's letter over the weekend, Suffern shared it online with friends, including Tony Posnanski's Facebook page, where he features stories of inspiration, weight loss and life advice.

Posnanski says he was moved by Ryan's letter because it reminded him of his childhood. "When I was a kid, I was bullied for a bit" because of his weight, he explained. Posnanski posted the story toCNN iReport, where it quickly garnered thousands of page views.

"I wanted to do something to get (the story) out," Posnanki said, adding that bullying is a serious issue that deserves attention.

A study released Monday in the journal Pediatrics says there is an association between being bullied and psychosomatic problems, meaning children who are bullied run the risk of higher mental problems that can cause them physical distress. Study authors Gianluca Gini and Tiziana Pozzoli write, "Given that school bullying is a widespread phenomenon in many countries around the world, the present results indicate that bullying should be considered a significant international public health problem."

Others studies report that as many as one in four children is bullied. There have been several incidents of teens bullied to the point of committing suicide, most recently 12-year-old Rebecca Sedwick, who jumped off a building because of cyberbullying.

Suffern says Ryan's letter to Santa sheds new light on her daughter's situation, and she plans on speaking to Amber's teachers and the parents of the bullies at school.

"If my kids don't call names and pick on others, I would expect other parents to teach their kids to be respectful, too," she said. "There have been times my kids would point at others and say, 'why is her hair so strange' and things like that, and I would say, 'You know, people are different, and that is just the way they are.' "

She says it's important to realize that bullying comes in all sorts of forms. "I understand that sometimes schools try to do as much as they can, but bullying doesn't have to physical; name-calling and putting someone down are considered bullying to me."

And Suffern says she is glad to have a selfless son like Ryan -- plus Santa -- watching out for Amber, too.

"We are hyper-vigilant at Rocky Mount Prep to prevent, intervene and protect our scholars from instances such as this. Our teachers and staff have received training to recognize and address these types of behaviors, and we are proud of the way they respond. We are saddened that this has taken place within our school family, and we can assure all of our parents, scholars and community that we will continue to do everything possible to provide them with a positive and safe learning environment."